Redevelopment and Expansion of Tarkington Park

The Phase 1, $6,000,000 Tarkington Park project is a collaborative effort to spur area redevelopment, new investment, and improved public amenities. As one of Indy’s best amenities, the Park is a literal example of how diverse neighborhoods, communities and strangers come together to plan and to play.

Midtown Indy has been one of many partners in the development of Tarkington Park. This urban green space is overseen by Indy Parks and is located between 39th and 40th streets, and between Illinois and Meridian streets.

Midtown’s involvement began in 2007 when we began to host public meetings about the future of the area and worked to address some of the needs and wants of residents. This neighborhood is special. It’s one that is precious to thousands of people, old and young — many of whom have decades worth of stories to tell.

What happens every day at the park is more of what Indy needs in other neighborhoods — new conversations, new meeting spots, new neighbors and friends, and more ownership of and new designs for public spaces. In that sense, Tarkington Park is indeed a model.

There is much to celebrate about the redevelopment of Tarkington Park and we’re proud to have a hand in its continued progress. Be on the lookout for more programming in the park, creative placemaking and engagement of businesses all along Illinois, 38th and Meridian streets. This project was the first element in a comprehensive redevelopment strategy for a half-mile square area at 38th and Illinois streets called Maple Crossing. Tarkington Park is a destination urban park in an area that serves over a dozen diverse neighborhoods. Learn more about the Great Places initiative and Maple Crossing. 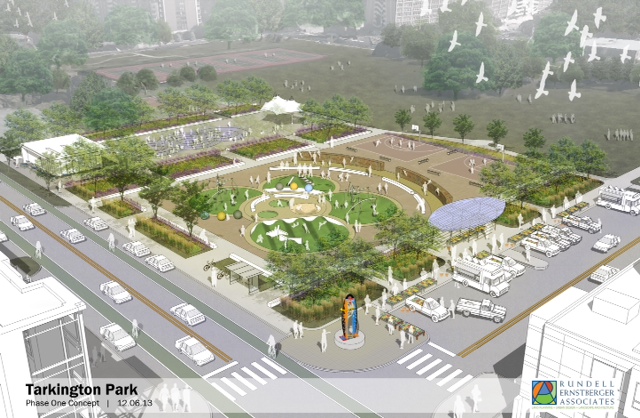